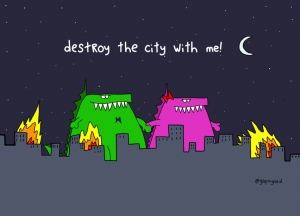 A couple if inches of snow this morning and life became difficult.  The local authority have decided to rebuild the bridge which crosses the Kennet between our village the A4.  This means that you have to take one of two country lanes that will accommodate only one car at a time.  The obvious solution of a one way system has not occurred to the local authority.   In addition no one has changed the gritting schedule.  Said country lanes are left untreated as they do not take any volume of traffic.  Until that is the gritted road is closed.   Then in Marlborough to safe money they decided not to grit the normal left turn to Swindon which is up a steep hill and no one realises you wait at the bottom until the top is clear if a road is iced.

I could go on, but most people will have similar experiences.   One of the real issues here is the fact that all local services has been sub-contracted with complicated processes for variation and the like.   A few decades ago all the services would have been within the control of a limited number of humans who lived locally and knew what to do with a few phone calls.  the breaking up into defined tasks in effect works to the centre of normal distribution in terms of possible events and this fails when exceptions occur.  The lack of human agency, or more specifically human agency with experience means that the system looses adaptive capacity.  The focus on cost reduction and efficiency means that there is a loss of effectiveness and the indirect costs go up and exceed the original savings.  But of course that is another budget holder’s problem.

I remember that happening in IBM.  A systems programmer was refused permission to go on a course for new operating system upgrade.  They were told to handle it from the manual.  As a result the next outrage took half an hour to resolve instead of a few minutes and a significant penalty charge on the contract resulted.  I was indirectly involved and asked the guy who refused the training how he felt and his response was simple.  He had to save money on his budget and he had done that.  The loss was someone else’s problems.

It was a bright cold day this morning and I had to take the backroad ...

An interesting day working with a group of Partners from ETHOS with whom we are starting to ...