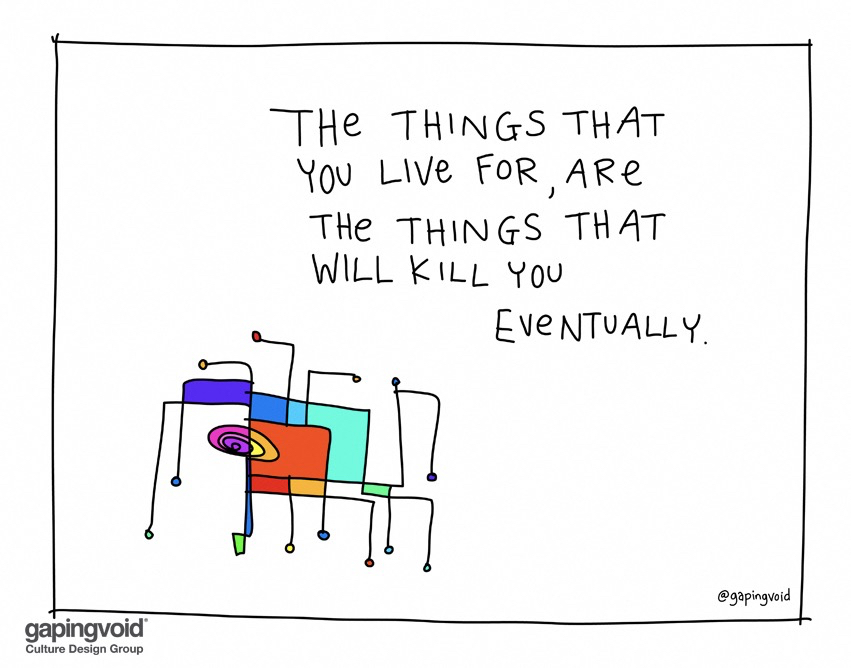 The bicycle puncture turns out to have been symbolic of a series of irritating events one side effect of which has been my longest absence from posting here since I started just over a decade ago. I’ve still got an email backlog that is scary and means I am missing some key responses (apologies to anyone impacted by that), completing two articles and several other tasks. I’m also about to start a period of work and travel that involves shifting packs of clothes from the boot of the car in the long term car park at Heathrow between intercontinental tips including a few double red eyes. But, and this is important, writing a daily blog post has become a part of my identity and I think is a key factor in my mental health!

So May Day is a good way to get back into the grove and it sees me in New York following an excellent day yesterday spent working on the book with Mary Boone in Connecticut and a dinner with Jason of Gaping Void (expect some big announcements on our growing partnership shortly). Ironically yesterday’s daily dose from Gaping Void contained one of Hugh’s more enigmatic cartoons which I reproduce above. I’m frequently asked how I manage the travel schedule. If I look forward I land at Heathrow early morning on Saturday and have to be in Bangor for Monday. If I can get my act together I’ll head up there for a days walking on the Sunday. Tuesday involves an 0830 appointment for a visa to India later in the month, three meetings and an evening flight to Brussels. Wednesday is a keynote there, return to the UK and drive to Cardiff for another keynote before returning to Heathrow for a red eye flight to Bahrain where I teach for the day followed by another red eye to Hong Kong for a few days. You get a sense of how things are.

Now I am often asked how I do this and I have a range of answers. At one level an acknowledgement of stupidity is due from time to time, the more trivial (but accurate answer) is an ability to sleep on planes augmented by G&T and bad romantic comedies. With that is a depth of experience which says that things generally work out on travel (aided by high status loyalty cards) if you just relax and don’t get stressed. More seriously I point out that I am doing something I am passionate about, something that I think might make a difference both on a small scale and a large scale. As long as that is the case the energy levels are there and the stimulation of meeting and talking with people is more than adequate reward. It has been easier since I got religious about making sure I get time off for exercise. So I will be taking the walking books to Hong Kong to do the Dragon’s Tail walk and taking the bike out for two hours on Saturday. Eating healthily and the odd partial fast helps as well. When I broke the habit of burger, fries and beer via room service on yet another late night arrival in yet another hotel things got easier as well.

So I will probably die in the saddle, but I suspect if I ever get of the horse I will die anyway ….

2 responses to “Staying in the saddle”

Too much travel, too little hill walking and only one day between trips. But at ...

The last few days have seen one of the periodic retweeting of a three year ...