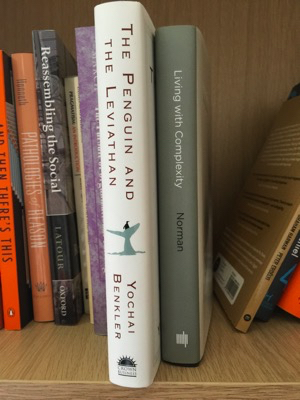 I’ll get back to the Predation and products series later in the week, more thinking and sketching to do there. Today I got home at well after midnight (why or why have a Rugby international at 2000 it makes no sense) and had to get up four hours later to drive up to Hull Business School to teach for three sessions on the MBA. Yasmin moved there from Warwick a year or so ago and my loyalty (and teaching) transferred with her. We had a good dinner talking about setting up an event(s) to commemorate Max Boisot both next year and for the 30th anniversary of the publication of Knowledge Assets in 2017. Yasmin and I originally met at an Academy of Management event and she set up a seminar for Max and I at Warwick University shortly after. For that alone I will be eternally grateful as without the intellectual stimulation of conversations with Max and as importantly without the reading lists he gave me, my own work would be far weaker and I I know that Cynefin as a framework would not have emerged.

At lunch we went to her office to leave my stuff (University lecture theatres are not safe these days) and left alone briefly I gravitated to the bookshelves. She had two books there I haven’t read so that order went off to the White Horse Book Shop (I try and support them rather than using Amazon) early this morning. Thinking about it I started to remember many other times when I have met someone in their own office with similar effect. Anthony Powell’s 1971 novel Books do Furnish A Room had a title that ironically referenced a more famous quote from Bacon and is one of my favourites in the Dance to the Music of Time series. Books tell you about people and are probably one of the best social indicators. I still remember seeing novels by Patrick O’Brian in an office in Arlington and getting into an animated conversation with their owner before I realised I was talking with Admiral John Poindexter. If I had started with the stereotype of the name it would have been a very different meeting. Books are more reliable.

The session at the University went well. good group of students and questions (with one exception) being interesting and challenging. At the end one of the students who had been more than prepared to take me on (I love that) came out to grab me on my way to the car and said Something changed for me today. That is the best compliment a teacher can get.

For those not familiar with our distant ancestors, this is a therapsid or one of ...

I had a long drive from Hull to the Arms Park today to watch the ...