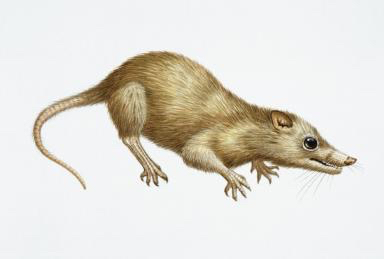 For those not familiar with our distant ancestors, this is a therapsid or one of the early mammal like reptiles. The early mammals evolved from them at the end of the Triassic period and co-existed with dinosaurs throughout the Mesozoic in small mouselike forms. The extinction event that wiped out the dinosaurs gave them the space to evolve into the various mammalian species that include our own. The characteristics that allowed these early creatures to survive in the age of dinosaurs also meant that they were better placed to survive on less food and fur handled plunging global temperatures. The dominant predator of the modern age was inconsequential in the previous age.

Now this is a subject of significant importance in product development. During a time of uncertainty (think meteor strike and global cooling) first mover advantage is key, you have the opportunity to move into disrupted territory and stabilise it around your products nascent capabilities. Once the ecology has stabilised the opportunity for disruption is significantly less and second mover advantage applies and/or what I call a hyena strategy, namely feeding or feeding of the dominant predator. Back in the 80s challenging IBM was difficult given their dominance. But they missed the ecological shift from mainframes and Microsoft became the new dominant predator a similar shift is currently in play and the opportunities are there.

Now for regular readers of this blog or attendees on our training, this is not a new concept but I am continuing the develop the idea and its implications. I spent most of this morning working through capabilities in this domain with one of our clients/partners so I was working through the practical implications and linking it with work on dispositional mapping from the developing theory of organisational change. I realised that while I had been talking about product development in the context of dispositional mapping and nudge based approaches I hadn’t yet blogged on the subject. So now is the time and I’ll start my summarising the stages, then I will pick up on the details in subsequent posts. I’ll also be teaching this at Hull Business School tomorrow so that will help sharpen my mind.

So what are the stages?

Now there is a lot more to go through to flesh that out, also to make it simple enough to be effective (that always takes more time). But the essence for a complex systems approach to product creation and marketing is there. The critical element is to change the dispositional state based on plausible proximities rather than a conventional push or pull strategy. More on this in future posts.

To the ENO last night for a production of Norma by way of a client ...

I’ll get back to the Predation and products series later in the week, more thinking ...