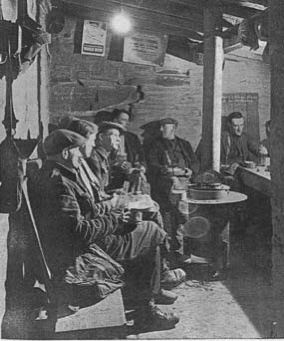 I debated using images of a mediaeval religious retreat to open this post, but then moved on to the Chapter House where disputes took place and matters were resolved. But then I realised there was a better image, using one aspect of Welsh Culture which has always intrigued me. In the slate mines of North Wales, the Caban was the place where workers met for lunch, but also where they debating current political matters. The President (a position of great honour in the community) would read aloud from the newspaper and initiate a discussion. The ffowntan (literally the tea-urn) would ensure suitable lubrication. Sometimes eisteddfodau were held there, all part of a rich cultural tradition informed by discussion and debate not the vicissitudes of the press and social media. So to announce the first even Cynefin Retreat, to be held in North Wales from the 11th to the 13th of September this year there is no more appropriate image.

To be clear, this is not another training course. It is a chance to move the field forward and I’m assembling a small faculty of people who have influenced me over the years to be part of the event. The idea is for the faculty to introduce ideas and concepts and facilitate discussion. I’ve also chosen one of my favourite locations for this, the place I try and stay at when I am up at Bangor University, it is a Dru Yoga Centre for those interested but with hi speed wifi and the technology for us to record key elements of the retreat itself. The location is in the Nant Ffracon Valley in Snowdonia with the slopes of the Cardeddau behind the location and the wonderful ridge walk from Y Garn to Bethesda on the other side of the valley to greet you when you wake up. For those interested there will be some dawn walks, possibly up to 3000feet and also some pre and post event opportunities to get onto the hills. Its a peaceful place as well, not a fancy 4* hotel or resort, but with good food using local caterers, comfortable accommodation and a great meeting space. Easy to get to from Manchester airport (which now has some of the cheapest flights to the US and Asia as well as Europe.

The faculty includes Alicia Juarrero whose book Dynamics in Action is one of the seminal texts in complexity theiry and one of the main influences on my work. Alicia now holds a post at the University of Florida, organised the various Philosophy and Complexity events in Cuba (where she was born) and now lives in Washington DC. She has engaged people at LeanUX in New York with her work on constraints and has a deep understanding of complexity theory, coupled with an ability to communicate that. Then we have Anne Pendleton-Julian (subject to confirmation) whose new book with John Seely Brown is an important contribution to a much needed evolution of design thinking. I met her when she was Director of the School of Architecture at Ohio State and we were both members of the US DoD’s Highlands Forum think tank. She is now Distinguished Visiting Professor of Design at Georgetown University and has also taught at MIT for over a decade. She is currently starting at assignment at Stanford. From the UK and my longest standing academic colleague, who worked with me and Max Boisot for many years, we have Yasmin Merali who is Professor of Systems Thinking and Director, Centre for Systems Studies at the University of Hull. She was Co-director of the Doctoral Training Centre for Complexity Science at the University of Warwick. I’ve been associated with her in both positions.

So its an impressive group and the subject range is open. I have in mind the whole notion of liminality which I am currently exploring in respect of Cynefin. I’m also involved in an initiative to look again at design from the perspective of distributed ethnography and ideation. Boundaries, constraints, the place of complexity thinking in the wider systems field, all of these are up for discussion and contemplation. As I said earlier this is not a series of lectures or breakout groups in a conference but a retreat with a participating faculty. It is also residential and we have a limited number of places. We’ll organise at least one evening outing to a local inn, possibly the one where the 1950s Everest Team trained and the possibilities of local cultural event are also under investigation. This is going to be an annual event, possibly taking place on three continents, but be there at the first ever one. We’ve priced it on the basis that its taking place in two months time which is not a lot of notice for some people, and to reflect the fact that it is the first time. We have a couple of bursaries for genuinely needy causes and there may be some options to stay off site and attend sessions,

The rooms at the Lodge can accommodate a single, double or pair. So the booking form allows you to buy a single room place now at an early bird rate, or pay a reservation fee on the basis you are prepared to share a twin bedded room. If you take that option places will be allocated as we can pair people. It is a first come first serve basis ….

2 responses to “The first Cynefin retreat”

I posted an early version of the liminal variant to Cynefin a few days ago, ...

Most large companies are prepared to invest in “incremental innovation” but very few are willing ...