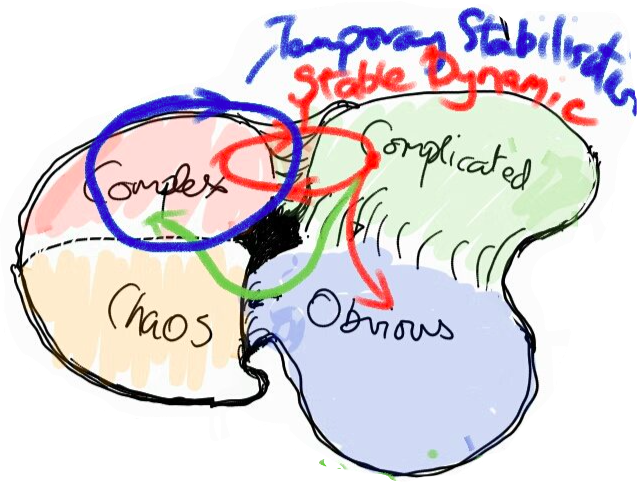 For various complex reasons which started with a casual throw away remark at Lean Agile Scotland followed by a brief twitter storm I am spending two days in Dubai with a Kanban group. That includes the co-authors of Essential Kanban Condensed, namely David Anderson and Andy Carmichael. I have the latter to thank for this picture he drew during one of the sessions where I was talking about Cynefin and placing emphasis the boundary conditions, including seeing the complex-complicated boundary as a domain in its own right. To make that easier I used the plane model of Cynefin which was originally draw with the incomparable Max Boisot at the Academy of Management in Washington many years ago. It shows the boundary between Obvious and Chaos as a cliff, in the sense of catastrophe theory.

The reason for doing this is the creation of a deeper understanding of the boundary conditions and their nature. Now I’m not trying to over complicate Cynefin. The basic representation remains as is, but the value of Cynefin is that it can be easily understood in that form, but can also be progressively understood at deeper and deeper levels; this is one of those. So lets look at the four main boundaries, ignoring for the moment the ones to disorder:

So at a high level that describes the boundaries. However I am starting to think that the boundary between complex and complicated should at times be maintained as a semi-permanent space – something I have talked about as a grazing dynamic. We should maintain a space of partial certainties, while maintaining options. But that is for a future post.

A couple of days ago in my first post on meaning I used a photograph ...

I’ve done the ascent and descent of the path to Llyn Bochlywd at the base ...